Imma be honest. I read this book because of the cover. The premise sounded interesting, but the cover is what drew me in initially. It was so creeptastic. I’m a sucker for a good cover, as you know. 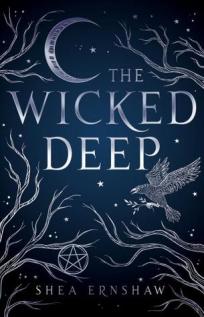 Every year in the town of Sparrow the spirits of three sisters return and possess the bodies three teen girls. The Swan sisters were accused witches, who the gentle townsfolk two hundred years ago decided to drown in the ocean. As you can imagine, the sisters were pissed. So much so that when they return each summer during the aptly named Swan Season, they lure teen boys into the sea and drown them too.

Swan Season has turned into a bit of a spectacle. Tourists flock to the town to see if the rumors are true. Half of the town’s residents don’t believe in the sisters and think someone or something else is drowning their sons. Seventeen-year-old Penny Talbot believes in the sisters, but has bigger problems to deal with. Her father disappeared three years ago and took her mother’s grip on reality with him. Now, she feels bound to the town to take care of her mother and the small island in the harbor where they live. When the handsome stranger Bo blows into town on the eve of Swan Season, Penny feels obligated to help and protect him from the sisters’ curse.

Shea Ernshaw does an amazing job feeding us bits of the sisters’ history throughout the story. Piece by piece, we get to know each one and discover the events that led to their demise, but only when we need it to make sense of the present. We also get to watch as Penny’s summer unfolds amidst hysteria at the deaths of local boys and the budding relationship between herself and Bo. I was enveloped by the sense of claustrophobia Ernshaw conveyed through the summer’s heat and Penny’s own feelings of being trapped by the town’s curse and her mother’s declining health.

This one is full of twists and turns that kept me guessing and reading late into the night. I was struck by the story’s bittersweet end and haunted by the magic that lingered in the town of Sparrow. I definitely recommend you add this one to your TBR!

I'm a Colorado-loving, coffee-drinking, mama bear with a mild La Croix addiction. My interests include reading, writing, baking, watching HGTV, and spending time with my beautiful family. I've been fortunate enough to travel the world with my husband, but we still have a trip wish list a mile long. A girl has to have goals, right?
Loading Comments...
Comment
×